Here in Technical Services we often talk with researchers at the beginning of their project about how to carefully design and get started with their experiments. It is exciting when you have selected the Luciferase Reporter Vector(s) that will best suit your needs; you are going to make luminescent cells! But, how do you pick the best way to get the vector into your cells to express the reporter? What transfection reagent/method will work best for your cell type and experiment? Do you want to do transient (short-term) transfections, or are you going to establish a stable cell line?

END_OF_DOCUMENT_TOKEN_TO_BE_REPLACED 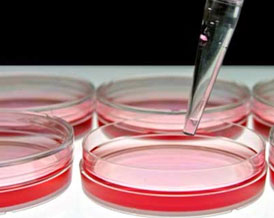 Scenario 1: Jake needs a flask of MCF-7 cells for an assay, so he sends an email to the graduate student listserv asking for cells. Melissa replies that she has an extra flask of cells that she could share. Jake happily accepts the cells and begins his experiment.

Scenario 2: Michael passaged his cells yesterday and, according to the protocol, was supposed to plate cells today for treatment. However, his previous experiments were delayed, so he decides to plate them tomorrow instead. The cells look healthy, so it should be ok.

What is wrong with the above scenarios? These actions may seem harmless, but they could be the cause of variability, leading to irreproducible results. END_OF_DOCUMENT_TOKEN_TO_BE_REPLACED

If you work with cell lines you may have paid attention to the dramatic headline published last month in the online journal STAT, Thousands of studies used the wrong cells, and journals are doing nothing.” In their column The Watchdogs (“Keeping an eye on misconduct, fraud, and scientific integrity”), Ivan Oransky and Adam Marcus call out the fact that scientists continue to publish research using cell lines that are contaminated or misidentified. Recent estimates have found that the percentage of misidentified cell lines used by scientists is as high as 20 to 36. The blame here is being placed on the peer reviewed journals for not blowing the whistle. The authors call for journals to put some “kind of disclaimer on the thousands of studies affected.”

This is not a new claim. The continuing problem of cell line misidentification, of lack of authentication, has been covered before in various channels. It’s easy to find news publicizing yet another retracted publication. Promega Connections has published a number of blog posts addressing this, one as recently as last year: Do You #Authenticate? This post describes the bold move by the journal Nature to adopt a new policy around cell line authentication. Beginning in May 2015 the journal required authors of all submitted manuscripts to confirm the identity of cell lines used in their studies and provide details about the source and testing of their cell lines. END_OF_DOCUMENT_TOKEN_TO_BE_REPLACED

Transfect using high-quality DNA. Transfection-quality DNA is free from protein, RNA and chemical contamination with an A260/A280 ratio of 1.7–1.9. Prepare purified DNA in sterile water or TE buffer at a final concentration of 0.2–1mg/ml.

END_OF_DOCUMENT_TOKEN_TO_BE_REPLACED This review is a guest blog by Amy Landreman, Product Specialist in Cellular Analysis at Promega Corporation.

Lentiviral vectors (LVV) have become a valuable research tool for delivering genetic content into a wide range of cell types. Commonly derived from the HIV-1 genome, LVV have the advantage of being able to infect both dividing and non-dividing cells. They can be particularly valuable for introducing genetic material into cell lines that are difficult to transfect using other methods and are also being used in gene therapy applications.

Unlike other gene delivery tools, transducing mammalian cells with LVV requires significant upfront effort since the LVV particles carrying the desired genetic content first need to be created. In general this involves co-transfecting a packaging cell line, such as HEK293T, with a set of three to four separate plasmids that encode the protein content required to generate the LVV particles: the transfer plasmid, which contains the transgene of interest, a packaging plasmid, and an envelope plasmid. After co-transfection, the packaging cell line is allowed to incubate for a couple of days during which time the LVV particles are produced and accumulating in the culture supernatant. The supernatant containing the recombinant LVV is then harvested and, following several concentration steps, the LVV particles are ready to be used for introducing the desired genetic content into the mammalian target cells. END_OF_DOCUMENT_TOKEN_TO_BE_REPLACED

Like Loading...
G Protein Coupled Receptors represent one of the largest classes of cell surface receptors and one of the most important classes for drug targets. Fifty of the top 200 drugs target GPCRs. GPCRs respond to various stimuli like light, odors, hormones, neurotransmitters and others. They cover virtually all therapeutic areas. When a particular GPCR is implicated in a disease, researchers screen the GPCR and its signaling pathways, the hope being that promising therapeutic targets might be identified. Major G-protein families signal via secondary messengers like cAMP, which in turn activate a range of effector systems to change cell behavior and/or gene transcription. There are various approaches and methods to study GPCRs and measure the increase or decrease of intracellular cAMP. However, the fastest and the most sensitive among all methods is a plate based cAMP-Glo™ Assay. END_OF_DOCUMENT_TOKEN_TO_BE_REPLACED It’s a scientist’s nightmare: Spending time and resources to investigate a biological phenomenon only to learn later that your cells are not what you think they are—their true identities hidden. As a result, all of the data that you’ve generated with those cells, published and unpublished, are cast into doubt. You thought that you knew your cells, that you could trust them, but your trust was misplaced. At some point, perhaps even before the traitorous cell line entered your laboratory, the cells were mislabeled, misidentified or contaminated with another cell line. It didn’t have to be this way. There are easy steps you can take to prevent the headache and heartache of cell line misidentification and contamination.

END_OF_DOCUMENT_TOKEN_TO_BE_REPLACED

Researchers working with immortalized cell lines would readily agree when I state that it is almost impossible to look at cells under the microscope and identify them by name. There are phenotypic traits, however they do change with change in media composition, passage number and in response to growth factors. I remember the pretty arborizations my neuroblastoma cell line SH-SY5Y exhibited in response to nerve growth factor treatment. Thus physical appearance is not a distinguishing feature. Currently, in many labs, researchers typically use more than one cell line, and more than likely, share the same lab space to passage cells and the same incubator to grow the cells. In such scenarios, it is not difficult to imagine that cell lines might get mislabeled or cross-contaminated. For example HeLa cells, one of the fastest growing cell lines have been shown to invade and overtake other cell lines.

Misidentification of cell lines has deep and severe implications. A review of cell lines used to study esophageal adenocarcinoma found that a large number of the cell lines were actually derived from lung or gastric cancers. Unfortunately, by the time this error was discovered, data from these cell line studies were already being used for clinical trials and other advanced studies and publications. Moreover, the cell lines were being to screen and design and test specific cancer drugs which ended up in flawed clinical trials. END_OF_DOCUMENT_TOKEN_TO_BE_REPLACED