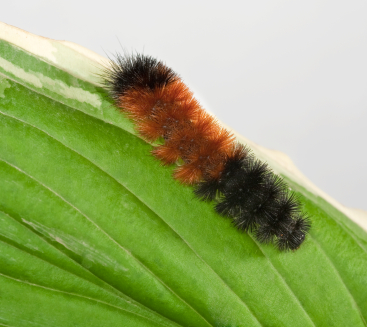 Recently, I was walking through a local park near Promega, when I spotted my first woolly bear of the season. As this furry brown and black caterpillar wandered along in front of me, I recalled the old wives’ tale about the width of their stripes being indicative of the upcoming winter fury. Spotting that little fellow in the sidewalk piqued my curiosity, and I decided to see what I could discover about my friend, the woolly bear.

The “woolly bear” is actually the freeze-tolerant final instar caterpillar of the common tiger moth Pyrrharctia isabella. These nondestructive caterpillars feed on corn, asters, birches, and sunflowers among other things. They leave their plants as third instar larvae then look for a cool, dark place, usually underneath leaf detritus to overwinter. They survive the freezing winter by producing “antifreeze” in the form of glycerol. Their super cooling point (lowest temperature they can reach without freezing) is –6° to –8°C. In the spring the hibernating caterpillars become active, eat for a few days and then each one will spin a silk cocoon from which an adult moth will emerge in about one month. From spring to fall there are usually three generations produced, and they are incredibly common in North America. 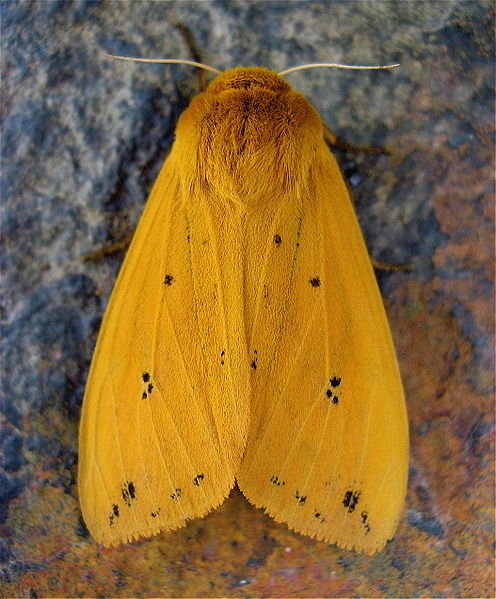 As one web site stated, every fall thousands of woolly worms are killed by bicycles and cars as they start the phase of “wandering” before their hibernation, but that may be the least of their problems. A recent study published in the Journal of Experimental Biology by Marshall and Sinclair points out that climate change and decreasing snow cover may be exposing woolly bears and other freeze-tolerant insects to repeated freeze/thaw cycles. While a fair amount of work has been done to determine how these caterpillars survive a single freeze and over winter, not much research has looked at how animals fair with multiple freeze/thaw cycles. What are the energetic costs? Is there mechanical tissue damage?

The authors of this study sought to answer some of those questions by looking at the sub-lethal effects of multiple freeze/thaw cycles on the caterpillars. They measured parameters like SCP, glycerol concentration, reproductive ability, and immune function to see if repeated freeze/thaws were more detrimental to overall fitness than a single freeze event. In their study they tested three hypotheses: (1) If there is no cost of freezing, fitness will not differ among individuals exposed to multiple freeze/thaw events and those exposed to a single event; (2) If there is a cost associated with freezing or thawing, repeated freezing will reduce fitness compared to sustained freezing and control experiments, and (3) If the lowered metabolic rate experienced by frozen animals increases fitness and overwinter energy use is a determinant of fitness, then caterpillars that experienced multiple freeze/thaw cycles and those experiencing sustained freezing would exhibit greater fitness than control animals.

To test these hypotheses, the researchers collected caterpillars from Ontario during the months of September and October over three years. Single caterpillars were placed plastic containers and feed pinto beans until feeding stopped (mid-November). Food was removed and incubator temperatures were set to follow weekly maximum and minimums for London, Ontario. Caterpillars were maintained at 0°C in constant darkness, and experiments conducted after at least three weeks under these conditions. There were some modifications to the conditions during the feeding periods during year 2 and 3 of the study. The caterpillars were divided into three groups: Control, maintained at 0°C; Multiple cycle, frozen for 5 events of 7 hours; and Sustained, frozen for one event of 35 hours. The freezing temperature varied with each year to reflect annual variability in the SCP. The authors report on several parameters in this study. The difference in mortality among the treatment groups was not statistically significant for every year, but when data for all three years were pooled mortality was significantly higher for the multiple cycle group (29.7%) than for the sustained freeze (10.3%) or control (13.1%) groups. Survival was defined as exhibiting a curling response to stimulus 24 hours after removal from freeze treatment. They were unable to detect any trends in overwinter metabolic rates as measured by rates of CO2 production. Repeated freezing did increase glycerol concentration over control and sustained freeze groups, but again no significant changes were detected regarding protein content, triglyceride content or water content among the groups. Repeated freezing was associated with significantly increased tissue damage to Malpighian tubules and hemocytes compared to sustained freezing, but the viability of fat body cells did not seem to be affected.

Repeated freezing actually appeared to enhance the ability of the caterpillars to survive a challenge when injected with pathogenic fungal spores, which is an intriguing finding. The authors note that it is possible that the damage to the tissues in these animals may have stimulated a wound response of some sort, which would lead to increased immune function in these animals. However, determining whether this finding is truly significant and explaining it requires more extensive investigation.

Clearly there is increased mortality and tissue damage associated with repeated freezing that is not seen in sustained freeze events. As snow covers become less predicable and a climate warms, understanding how multiple freeze/thaw events affect the physiology of freeze-tolerant organisms poses a fascinating set of questions for biologists to ask.

One thing is sure, I will never look at a woolly worm in quite the same way again.