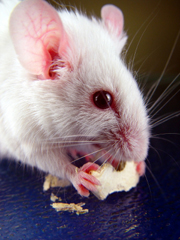 I love potato chips. There’s something very satisfying about the crunch of a good chip. The problem with chips, other than the obvious effect they have on my waistline, is that I can’t eat just one. Neither can my husband, who loves to open a bag of potato chips while I’m preparing dinner! To explain the disappearance of the potato chips, we joke that the chip-eating culprit in our house is not my husband but a giant mouse that has developed a taste for salty snacks.

Recent research presented by Tobias Hoch at a meeting of the American Chemical Society shows that not only do rodents love potato chips but that this attraction may not be due solely to the high ratio of fats and carbohydrates, which is one proposed explanation for the “bet you can’t eat just one” phenomenon. There is something else that makes potato chips irresistible.

In this research, each group of rats was offered one of three supplementary food items in their diets: powdered standard rat chow, a mixture of fat and carbohydrates that mimics the composition of a potato chip, and the real thing. Hoch found that, while the groups ate similar amounts of the three options, the rats more actively pursued potato chips and least actively pursued powdered rat chow. When the rats’ brains were examined using Manganese-Enhanced Magnetic Resonance Imaging, the researchers learned that, not surprisingly, the reward and addiction centers of the brain exhibited the most activity. In rats eating potato chips, however, brain areas associated with food intake, sleep, activity and motion were stimulated quite differently than in rats eating powdered rat chow or the fat and carbohydrate mixture. Clearly, the high fat and carbohydrate content is not sufficient to explain this behavior.

Although these experiments could not explain how these differences in brain activity translate into a strong preference for chips, additional experiments are already underway to identify the molecular triggers and determine if human brains react similarly. If identified, these molecular triggers could be added to healthful foods such as vegetables so that we are almost powerless to resist broccoli or carrots. Alternatively, these triggers could be blocked to reduce the attraction of junk food, decreasing our consumption.

Until that time though, I will continue to limit my potato chip purchases and, when I do buy chips, find a better hiding place so that the giant chip-loving mouse that lives in our house has fewer temptations.