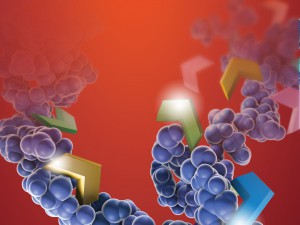 Here we provide two examples of “atypical” experiments that take advantage of the properties of the ProteaseMAX™ Surfactant to improve studies involving digestion of complex protein mixtures.

Example 2
The vertebrate hair bundle, the sensory organelle of the inner ear, is necessary for mechanotransduction, which is the process of converting mechanical signals like sound and head movement into electrical excitation in the nervous system. Knowledge of the protein composition of the bundle is necessary for understanding how the bundle functions and how it is assembled. To address this question, proteins were extracted from bundles (mice 4-6 and 21-23 days old) and subjected to digestion with trypsin followed by mass spec analysis (2). Bundles were purified using the twist-off method (described in detail in ref. 3) from 4–6 and 21–23 postnatal day mice. Proteins were separated by running into a NuPAGE 4–12% Bis-Tris gel Gels were then stained, and the separated proteins was manually sliced into six pieces, Each gel slice were washed and then dried in Speed Vac vacuum drier. The gel pieces were rehydrated with 100 μl of 25 mM DTT in 50 mM NH4HCO3, then were incubated for 20 minutes at 56 °C. The supernatant was discarded and 100 μl of 55 mM iodoacetamide in 50 mM NH4HCO3was added; this solution was incubated with the gel pieces in the dark for 20 minutes at RT. The supernatant was discarded and the gel pieces were washed twice with 400 μl HPLC-grade water. The washes were discarded and 200 μl 50% 50 mM NH4HCO3/50% acetonitrile was added. This wash was discarded and 200μl 100% acetonitrile was added.

They found that digestion in ProteaseMAX™ Surfactant-Trypsin Enhancer substantially increased the recovery of hair-bundle peptides. To each gel piece, 30 μl of the 0.01% ProteaseMAX™ Surfactant/ 6 ng  per microliterμl trypsin solution was added and incubated for 30 miutes at 4 °C. The authors of the study noted that a small number of proteins dominated the bundle sample in young mice and that during development the bundle proteome becomes more complex.