Malaria affects nearly half of the world’s population, with almost 80% of cases in sub-Saharan Africa and India. While there have been many strides in education and prevention campaigns over the last 30 years, there were over 200 million cases documented in 2017 with over 400,000 deaths, and the majority were young children. Despite being preventable and treatable, malaria continues to thrive in areas that are high risk for transmission. Recently, clinicians started rolling out use of the first approved vaccine, though clinical trials showed it is only about 30% effective. Meanwhile, researchers must continue to focus on innovative efforts to improve diagnostics, treatment and prevention to reduce the burden in these areas.

END_OF_DOCUMENT_TOKEN_TO_BE_REPLACED 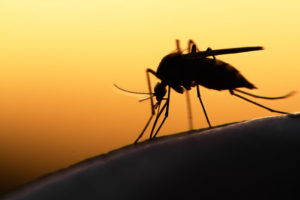 Malaria is a life-threatening blood disease that plagues nearly two-thirds of the world’s population. The disease in manifested by parasites of the Plasmodium genus and transmitted to humans through the bite of female Anopheles mosquitoes, which serve as the primary disease vectors. Roughly 200 million people per year are infected with malaria, and approximately 400,000 deaths are reported annually, with children under the age of five comprising the majority of victims.

Africa disproportionately bears the global brunt of this devastating illness, with approximately 92% of all reported cases, as well as 93% of all reported deaths, originating from the continent. This can be partially attributed to the fact that the conditions for transmission are essentially ideal there: the principal vector species Anopheles gambiae are abundant in this region, and not only do they prefer to source their blood from humans over animals, but the mosquitoes also tend to have a longer lifespan, which allows the most common and deadly malaria parasite, Plasmodium falciparum, to complete its life cycle, which contributes to higher disease transmission efficacy.

Though malaria is a preventable disease, often the areas affected most lack access or resources, or are politically unstable, all factors that can contribute to the absence of consistent, functional malaria control programs. Though malaria is also a curable disease, it has long been debated whether eradication was even within the realm of possibility. There are four species of Plasmodium parasites responsible for the pathogenesis of malaria and each exhibit different forms of drug resistance and each responds differently to different medications. This alone makes the prospect of developing a single overarching vaccine for all strains of malaria an improbable achievement and the idea of eradication practically impossible.

In a study recently published in Nature Biotechnology, a team of scientists were able to effectively implement a new, though indubitably controversial, type of genetic modification. The team was able to weaponize mosquitoes to take out…other mosquitoes! They were able to engineer male mosquitoes to rapidly pass down a fatal mutation through generations of their own species, effectively sterilizing all female offspring, eliminating the possibility of successful reproduction and resulting in a population crash. END_OF_DOCUMENT_TOKEN_TO_BE_REPLACED

Like Loading...
A paper published in on August 8 in ChemBioChem has identified a number of small molecule kinase inhibitors that may have potential as antimalarial drugs. The authors, Derbyshire et al from Duke University, used a panel of human kinase inhibitors to screen for activity against malaria parasites. Using a high-throughput screening approach, they were able to identify several potential drug targets among the kinases of Plasmodium sp.,—most of which were effective against the parasite during both it’s blood-borne and liver-based life cycle stages.

Liver and blood-stage malaria parasites have different gene expression profiles and infect different host cells. The authors exploited these differences to try to specifically identify compounds that were active against the parasite while it was still in the liver, the idea being that any drug-based prevention strategy needs to be effective against the parasites in the liver in order to eradicate infection.

The authors screened a library of over 1300 kinase inhibitors that included several compounds already being used in clinical trials for anti-cancer activity. Initial screening was performed in human liver-derived HepG2 cells infected with Plasmodium berghei expressing a luciferase reporter. Compounds that decreased parasite load by more than 95% were further characterized in dose-response experiments, and promising hits were tested in using luminescent and fluorescent cell based assays to identify compounds that were not toxic to liver cells. END_OF_DOCUMENT_TOKEN_TO_BE_REPLACED