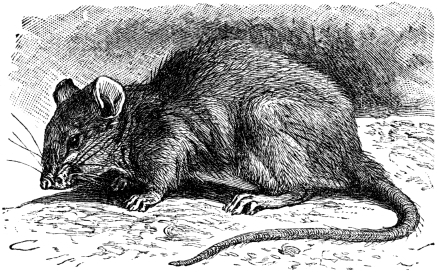 When cornered, most rats will hide or run away. But when an African crest rat is cornered, it arches its back, parting the long gray hair on its outer coat to display the black and white bands that stripe its flanks. This odd display seems to be warning predators to stay away, and it seems that it is more than just bark. Indeed dogs that bite these rodents often end up sick or even dead. But what is the crest rat’s deadly secret?

A group of researchers led by Fritz Vollrath from the University of Oxford, put on their detective hats to find the answer. Crest rats, they observed, gnaw on bark from the African tree Acokanthera schimperi and then slather their short hairs with a thick spit. Contained in the spit is the toxin, ouabain, which over stimulates the heart muscles and was once used by African hunters to kill elephants. The unique hairs on the rat’s black and white undercoat act as a wick for the toxin, and the outer coating of the hairs are covered in holes. So when a dog or other predator grabs a bite of rat, they also get a mouth full of toxic hairs.

But how does a predator know what message the black and white striped rodent is sending? Through experience it would seem. The researchers found that the crest rat is uniquely suited to be bitten and survive. Their hide is unusually thick for a rodent; all the better to withstand canine jaws.  In short, they are built to take a beating.

Although other animals, such as the poison dart frog, are known to gather toxins from plants, this self-anointing  behavior is unusual in mammals, and previously unheard of on such a poisonous scale. The crest rat can actually kill its much larger attacker.

And for African dogs?  The message is there in black and white: “Don’t Bite.”